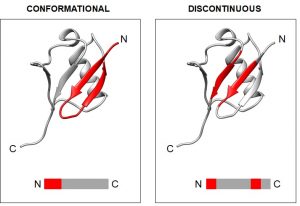 Figure 1: Conformational epitope (left) and discontinuous epitope (right), as highlighted in red in the ribbon diagrams of ubiquitin. To indicate this part in the sequence, it is also highlighted in the horizontal bars, which represents the sequences from N- to C-terminus.

Precise and cost-effective definition of conformational epitopes and discontinuous epitopes

Given that the vast majority of therapeutic antibodies have a conformational or discontinuous epitope (Figure 1), Pepscan has developed a unique platform that can characterize such epitopes with high accuracy. At Pepscan, we address the 3D spatial conformation of epitopes by using our in-house developed and proprietary CLIPSTM (Chemical Linkage of Peptides onto Scaffolds) technology to map epitopes contained within looped, beta sheet or helical structures with constrained peptides (Figure 2).

Figure 2. Linearly generated peptides are cyclized via insertion of cysteines at specific locations in the peptide chain. A chemical linker is added, which is then CLIPSed into a constrained peptide. Illustrated here is the formation of a looped peptide, and an example showing that an antibody recognizing a loop in a structure of follicle stimulating hormone (FSH) can be recognized only if the CLIPS reaction is applied.

A discontinuous epitope consists of non-adjacent parts of the protein sequence that form a specific 3D conformation in a protein tertiary structure. CLIPSTM discontinuous epitope mapping applies a combinatorial matrix design (Figure 3), in which sequences from the target protein are screened against each other in a bicyclic loop construct. The target protein is converted into an extensive library of conformationally constrained mimics that has sequences which are not adjacent in the primary sequence brought together by a CLIPSTM scaffold. This library of CLIPS-based tertiary structure mimics is then synthesized on a solid support using high-throughput microarray synthesis technology. If an antibody binds to a discontinuous epitope, peptide constructs containing these parts should bind at a much higher affinity than their single-loop counterparts.

Figure 3. The target protein containing a discontinuous conformational epitope (left) is converted into a library of linear peptides as well as CLIPSTM constructs via a combinatorial matrix design. Peptides are synthesized on a proprietary minicard and chemically converted into spatially defined CLIPS constructs (right). Antibody binding is quantified using an automated ELISA-type readout. Constructs representing both parts of the discontinuous epitope in the correct orientation are best for binding to the antibody.

The majority of antibodies have a discontinuous epitope, unless they were raised against single peptides. Mapping an anti-anthrax antibody using linear and CLIPSTM conformational mapping showed only a single part of the epitope. Supplemental mapping using matrix-style scanning of the antigen sequence through a bicyclic loop revealed additional binding sites that were directly adjacent to the dominant part of the epitope. While the dominant part was found in the linear and conformational screen, often such details will determine whether an antibody is patent-protected or if there is freedom to operate.

CLIPSTM precision epitope mapping revealed distinctly different binding sites on CD20 for two antibody drugs and demonstrated that one of the drugs uses a unique discontinuous binding site. This information was crucial to confirm the freedom to operate and for the antibody patent filings. It also contributed to the understanding of the mechanism of action and offered a valuable opportunity for marketing differentiation. 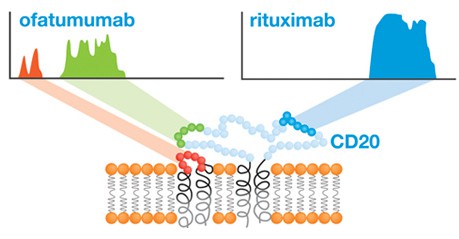