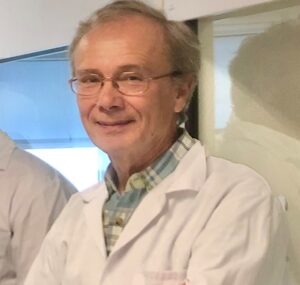 “Which opportunities do we see that would further improve our peptide library technology and make it even more effective? This was a returning topic on the Pepscan agenda and for me personally a very nice challenge to work on,” says Wim Schaaper, Senior Scientist at Pepscan from 2001 till his retirement in 2017. Currently Pepscan has, as many companies, a team of improvement engineers. Wim Schaaper is considered the companies’ first improvement engineer, even though there was no official title for it at the time.

Once the Pepscan methodology proved itself as an effective technology using peptides to identify binding mechanisms and antibody activity, research into bioactivity screening accelerated. Peptide libraries became a key tool in identifying antibody binding. “At a later stage, Pepscan added screening of peptide-protein interactions in general, like T-cell screening, discovery and optimalisation of therapeutic peptides.”

A new technology was born

In the early days, pin-blocks that enabled direct ELISA testing were developed in collaboration with Mario Geysen, who was working at the Australian Commonwealth Serum Laboratories. The peptide library technology was born. “The potential of applying peptide-on-pin libraries became more and more clear, and we focused on finding ways to make the process robust and efficient. Synthesis of the classical solid phase peptides had to keep up to speed since these were needed to validate the pin experiment results. I developed a semiautomatic synthesizer to synthesize multiple peptides in parallel, which significantly increased the number of peptides produced on a daily basis. I also worked on automated peptide purification that could occur through the night to speed up the process. This not only made our library technology robust and effective, but also provided us with new expertise and in-house developed peptide synthesis equipment. As a result, Pepscan could take a significant step forward, and it joined several EU-funded projects and also began to work with customers.”

Want to find out how Pepscan’s peptide library technology could support your projects? Get in touch with one of our experts.

After completing his peptide chemistry study and PhD at Delft University of Technology, Wim Schaaper joined Rob Meloen’s research group in 1984 and again at Pepscan in 2001. In addition to being a force behind technological innovations in peptide synthesis, library and purification technology, Schaaper was also instrumental in multiple studies, including the development of GnRH tandem peptides for inducing an immunogenic response to GnRH-I without cross-reactivity to other GnRH isoforms to optimize efficient immunocastration of male pigs (link to publication). He also worked on numerous solid-phase and solution-phase peptide synthesis projects. Schaaper retired in 2017.